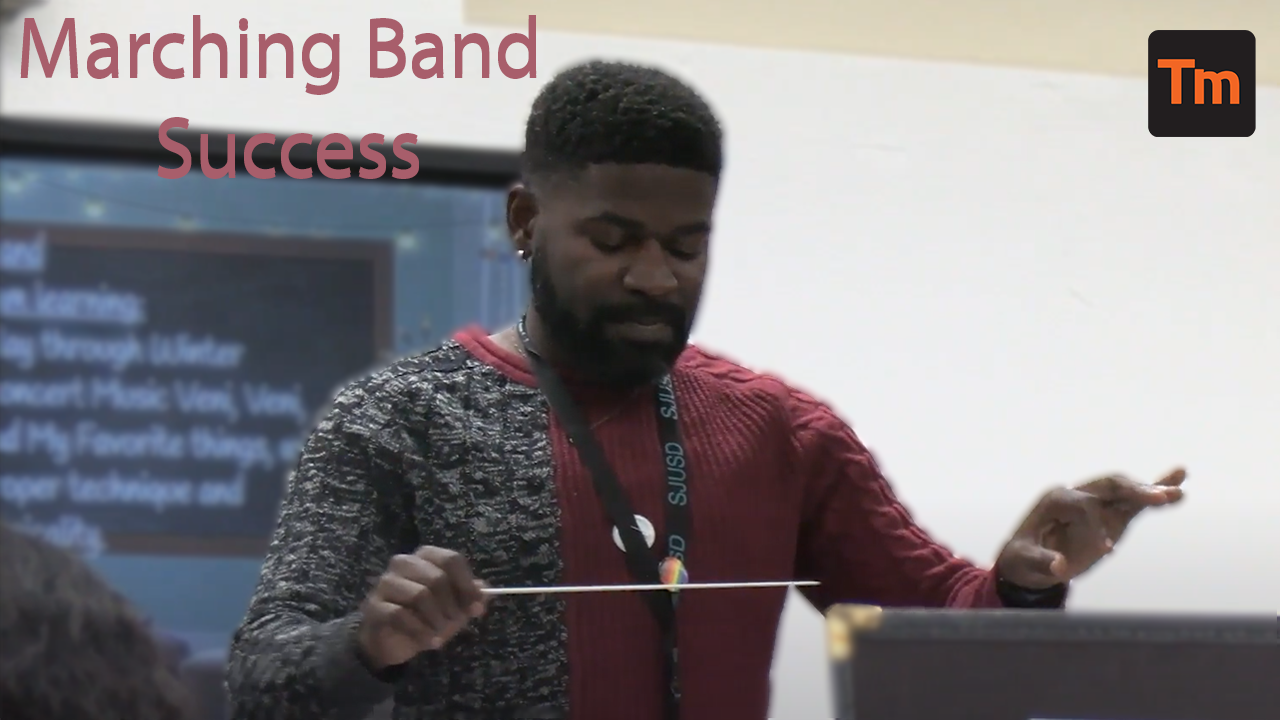 The marching band at San Jacinto High school has improved significantly over the years and more so this year with the new band teacher, Mr. Harris. “Since I have arrived I got here to San Jacinto about a month late the band has improved significantly our first competition we got six place our band was kinda used to not placing well in competitions, our most recent competition was rancho Verde on November second where we earned second place we earned a score of 57.7 the band that got first place only beat us by 4.15 points.” stated Mr. Harris. Mr. Harris explained that the marching band uses a variety of instruments. “The type of instruments we used in the marching band performances typical band instruments so flute, clarinet, saxophone, trumpet, trombone, tuba, and drum line which consists of snare drum, quads and base drum and then we have our front on samba which is called pit where it has calliaphone, auxiliary items like tambourine, gong, and maracas.” explained Mr. Harris. The marching band practices frequently to improve their skills. “Our marching band rehearsals Tuesday and Thursday from 6:00pm to 9:00pm two days a week so that’s an additional 6 hours every week that were putting in but something unique about our band they didn’t get to have band camp we’ve been performing against other bands that have had band camp which is an activity that is two to three weeks depending on your school where we can prep for the marching season” stated Mr. Harris. You can look forward to more performances from the marching band. “Our next performance is going to be December 7 here at San Jacinto. It’ll be our winter concert and we look forward to having people come by to our performances.” stated Mr. Harris. There are various qualifications students need to join the marching band. “ If you want to join band just make sure you know how to play an instrument cause band is not easy band is hard I’m not going to lie to you, be prepared for some structure discipline and fun band can be fun but when you join band especially with me as a teacher just be ready to put in some work cause we put in a lot of good positive results and I really like to show those results off on what were doing.” stated Mr. Harris. Students here explained their perspectives on how they did in their performance. “My thoughts on how successful the Band has been is pretty good. We came a far way from where we were last year to where we are now.” said a student. “My thoughts are that we improved a lot since last year. It was a big change in the way we performed musically. I can tell I have more motivation to play my instrument now than I did last year and it’s just been more fun and more involved.” said a student. “I think I did pretty good. I could use some improvement but for my first year I think I did pretty good.” said a student. ‘I think for our circumstances and the fact that we started a month later than everyone and we had a brand new band teacher we did pretty good.”  said a student.